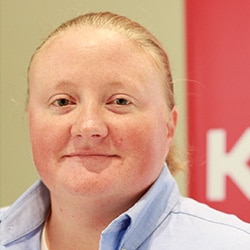 The sense of pride she earns by contributing to a building or a weld that holds up a 10,000-pound vessel provides Holley Thomas satisfaction in her chosen career.

Thomas became interested in welding in 2007 while earning a degree in robotics from Central Alabama Community College. She discovered that not only did she have a great talent for welding, she fell in love with the craft. A native of Alex City, Alabama, she was recruited by KBR, a global engineering and construction firm, as part of their outreach and engagement with the college’s technical programs.

Over the next 11 years, Thomas devoted the time to take advantage of KBR’s training offerings and grow as an experienced craftswoman. She started as a welder, worked her way into supervision, and in the last three years, has been working in a quality inspector role. With a starting salary in the industry of about $55,000, it has now more than tripled.

Thomas appreciates the self-reliance a career in the industry has availed her. She states, “Construction has helped me build my life in many ways. I take pride in being independent in every aspect of my life and construction has afforded me in that opportunity.”

She has worked in a variety of plant environments in several states, including power, pulp and paper, fertilizer plants, and petrochemical. As she grew in her own career, she paid her wisdom forward to others, by serving as a welding instructor and mentor on multiple job sites. In her current role as quality inspector, she is responsible for seeing that the craft work is performed according to project protocol and requirements.

She is the first woman welder to have taken top honors (gold) in welding at Associated Builders and Contractors (ABC) National Craft Championship in the 2010 competition. In 2015, Holley was awarded the National Craft Professional of the year by ABC. She continues to volunteer at the national event as a judge for the welding competition, as well as regional and local construction events to attract more talented young women into the industry.

Thomas’s success shines a light on the opportunities and salaries available in the construction industry. Thomas shares “Being a skilled craft professional, and furthermore a female in the industry, helps me leave a great legacy. I’ve been able to show other women in the industry that you can start from the bottom and work your way up to where I am today.”

Click here to discover the steps individuals should take to start a career in the construction industry.